Just getting done stuffing about 10# of sausage. Feels good to get back in the normal groove. Last year I was a little lazy and didn’t make any sausage. Here’s the routine:

Finally got a chance to put in some serious time in the tree stand this fall. My boys(7 and 10) are active in sports and they have a little break right now.

Hunted my father’s farm in the thumb of Michigan for a few sits Saturday and Sunday. Sunday morning, it was time to make my way home. Luckily, I’ve got some good hunting within a mile of my house.

Sunday night found me in one of my favorite local trees. My stand was located a short distance inside a woodlot, bordering a cut bean field.

No activity other than pesky squirrels until about 6:30 when a nice doe began feeding in the bean stubble. She was certainly of “shooter” size and the wind was perfect but she was headed to a trail that wouldn’t lead past my stand.

As I willed the doe to come my way for a shot, I heard the distinct rustling of leaves that sounded much larger than a fox squirrel. I slowly turned to see a six point buck quickly approaching my shooting lane about 12 yards away. The wind was just barely in my favor to avoid him getting a nose full of smelly bowhunter. Just as he entered the opening he stared directly at my form in the tree. I would have been somewhat sky lined against the open field behind me. Between that and the wind I was sure he was going to blow out of there.

Thankfully, I was able to hold still enough to avoid detection. The buck took another step and I came to full draw. He was about to pass the shooting lane so I gave a soft bleat and he stopped in a spot offering me a clear shot. I focused on the pocket behind his front leg and took my time expanding through the shot. I’ve been using more of a dedicated gap lately and the shot felt great. Unfortunately, I pulled the shot about 2” to the right of my aiming point. Looked like a liver hit initially as I didn’t think the shot was so far back to be in the stomach.

After the shot, I watch the buck cross the creek out of sight. I instinctively flipped my light stocking hat up so I could listen for the crash but none came. Keeping my eyes on the last place I saw him, I noticed movement in the faint light. By using my binoculars, I was able to see a deer with it’s tail up. I noticed it’s legs widening and it looked like it was laying down. At that point, if I were a betting man, I’d say I got liver and the buck would be laying right there, 60 yards from the shot.

I always like to give them some time before getting down from the stand so I quietly gathered my gear and took about a half hour to pickups and climb down. I was able to find the location of the hit without much trouble but couldn’t find my arrow. There was a patch of hair and a few drops of blood at the site. I was able to carefully follow the trail about 20 yards to the point where he exited the other side of the creek but was not encourage by the amount of blood. The blood trail reminded me a lot of liver hits I’d followed up on in the past. I decided to back out and give it a few hours.

Two hours later, I enlisted the help of my uncle to get some more eyes on the blood trail. He’s always been an excellent tracker and overall woodsman. Most importantly, he knows how to calm me down and take time with the track.

We picked up the track where I’d marked last blood with a glove. The trail stayed sparse and it took 15 minutes or so to make the next 20 yards. After that, the flood gates opened and soon I heard Uncle Dan say, “Here he is.” I couldn’t help but remember him finding my first bow killed buck on this same farm over 20 years ago.

I had indeed taken the buck through the liver, just back from the heart. 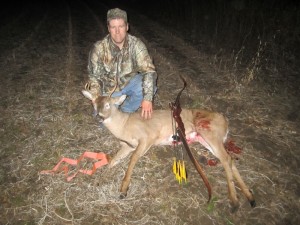 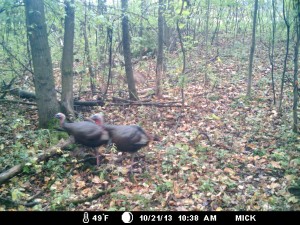 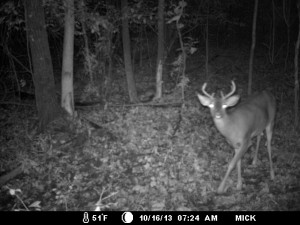 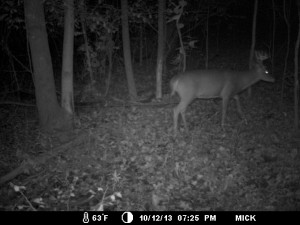 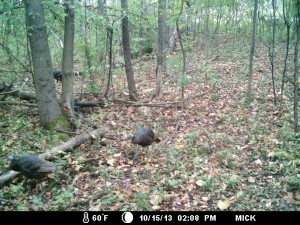 No time to hunt so I’m still working on shooting when I get a chance.

Tonight I was shooting well but hitting a few inches left. I finally realized that I was forgetting to keep my head tilted in to the bow a little. Since it was getting dark I was shooting with a yard light on and I was able to see the shadow of my string outlined on the riser. The extra visual reminding me that I could use the string blur to make sure my head was in correct alignment.

For most right handed shooters, shooting left is a common problem. If you read an archery forum you’ll get lots of tips on how it must be too stiff an arrow. Maybe if you’re shooting bare shafts or broadheads but most of us can push arrows left pretty easily with a few form issues.

My favorite is to try and push with my left shoulder to try to help the bow to full draw. This causes all kinds of issues but mostly shots pulled way left and string slap to the left forearm.

Another great way to go left is to torque the bow handle.

I think I’ve been doing all 3 of them for periods of time lately. Need to really work to keep my shots a little more Republican.

Two bucks cruised by about 8:30. Both 1.5 yo 6-8 pts. One had a deformed right side. The bigger buck passed about 2 yards beyond my shooting lane and into the brush. No chance for a shot.

They acted like they may have been bumped from their beds. They crossed the soybean field and quickly moved to the wood lot to the South. 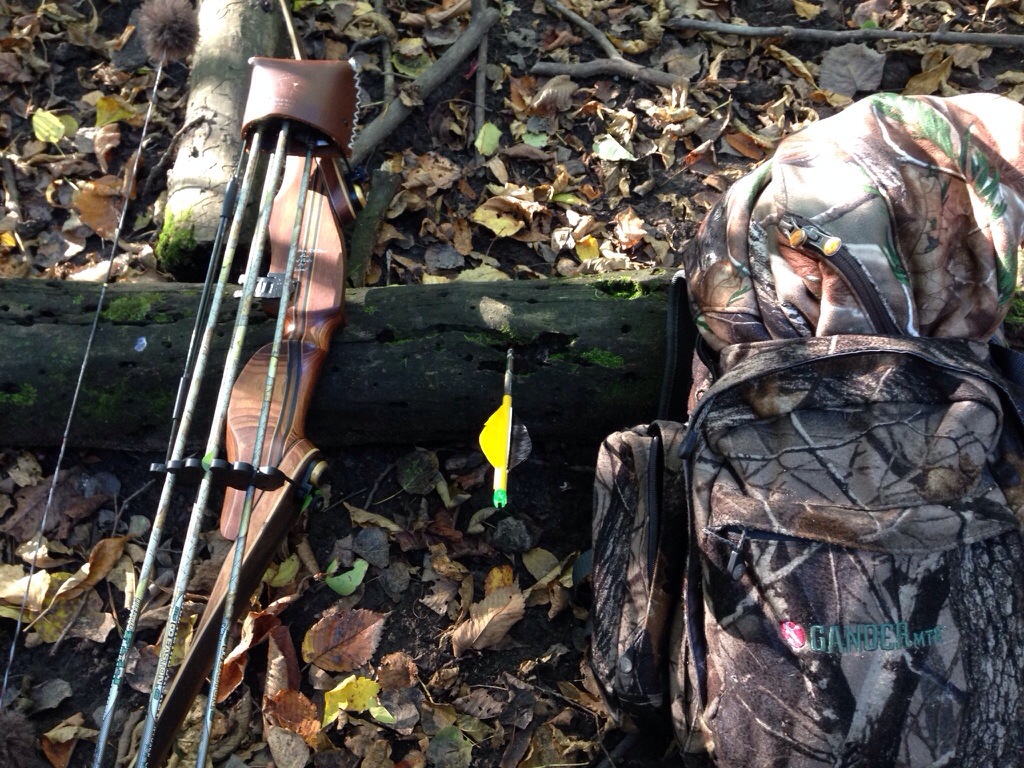 Inspired by watching several hours of Jimmy Blackmon last night, I figured my gaps during my lunch break today.

I didn’t really shoot tons of groups to confirm these exactly so my numbers are a little rough. I did find this to be an excellent exercise in the quest for better shooting however.

What I discovered is that I’ve already shot so much using the arrow as a reference in sort of a “split-vision” manner is that this really just confirmed the gaps that I’ve been using all along. This helps a ton for those form flaws that seem to cause me to blow shots way high at times. When those issues crop up I can just focus more intently on the arrow and the gap. A lot easier to focus on fixing form flaws when you take the issue of focusing on a tiny spot within the bullseye out of the equation.

Maybe the most interesting thing about plotting these gaps is that there is only a 3″ difference in gaps between 7.5 and 20 yards. What do you know, right about where most of my treestand shots take place during deer season! That gives me a ton of confidence in that I can focus on an aiming spot in the field and just use the gap as a quick reference. Combined with making sure to bend at the waist this should help a ton in avoiding the tendency to shoot high from an elevated stand.

Shooting practice is really all about building confidence for hunting right now. Hunting time is precious. I’ve I’m going to invest a whole day in the November woods I want to make a quick kill rather the spending the whole day tracking a wounded whitetail.

Just about traveling at the right time finally. 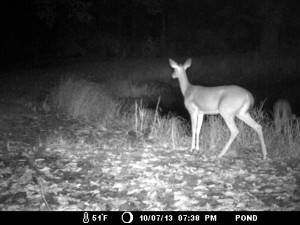 Love this! Especially at about the 18 minute mark where Jimmy demonstrates how the gap remains very close near the apex of the arrows trajectory.